Last weekend Ryan and I set out on our first bikepacking trip.  Our plan was to leave Thursday evening and ride 118 miles (with around 13,000 feet of climbing) to Prescott, arriving on Saturday afternoon.  For the past two months we planned our route, read about bikepacking and bought our gear.  The week before our trip the forecast did not look great; Thursday was forecasted to be over 100°F, just like Ironman Coeur D’Alene!  In hindsight we should have changed our plans when we saw the forecast, but we were too excited and forged ahead.

Around lunch time on Thursday we loaded up our Rouge Panda bags onto our bikes and did a final gear check.  Ryan was carrying most of the gear since my Surly Pugsley is significantly heavier than his Salsa.  We tried to pack only the essentials since we don’t own a lot of ultra light camping gear.  However, I did bring along a few ‘luxury’ items: a bowl, a trigger point ball and pajama pants.  Right before we left I brought the bathroom scale out to the garage so we could weigh our fully loaded bikes, we both weighed in at 65 pounds!  Yikes!

We planned our first day as our easiest day, our warm up if you will.  Twenty-seven, relatively flat miles on pavement to Lake Pleasant.  We were happy it was an easy day because when we left our house around 3:30 PM it was 100°F.  The highlight of the ride was leaving the neighborhood as school was letting out, as the buses drove past us the kids were banging on the windows, yelling and cheering us on!  It was like our own personal send off!  We made it to Lake Pleasant in about two hours and pulled up to our campsite while the sun was still up.  Not surprisingly there was no one else there.  I noticed some burro poop pretty close to our campsite, and quickly pointed it out to Ryan.  Lake Pleasant is herd management area (HMA) for around 425 wild burros, last time we camped there a burro frightened me in the middle of the night, and when I tried to wake up Ryan he accused me of snoring!  Needless to say I wasn’t thrilled to discover we would be sleeping in a location with evidence of recent burro activity.

After setting up camp, we made our dinner and tried to enjoy it all the while profusely sweating.  We both made all of our own freezer bag meals for the trip.  Ryan was having chicken and rice and I had vegetarian couscous.  Ryan’s meal was gigantic and bland, but mine turned out pretty good.  We will definitely keep that in mind for our next trip.  I decided to take this opportunity to throw away some of my melted trail mix and extra snacks so I could shed some weight.  As the sun set we got into our tent and tried to get to sleep early.  We laid as still as possible in an effort to keep cool, and joked that we would be dehydrated before we even started the next morning because of the heat!

Our campsite at Desert Tortoise Campground.

Lake Pleasant is home to hundreds of wild burros.

If you like wildlife, Lake Pleasant is an awesome place to camp, if you like sleeping, not so much.  From eight to ten o’clock it seemed like every single animal decided to make its presence known.  Burros were hee-hawing, coyotes were howling and some small critters were trying to get into our gear.  Every sound had me on edge, and since our rain fly wasn’t on the only thing between me and the animals was a thin layer of mesh.  It’s amazing (and foolish) how I feel so much safer in my tent when I can’t see what’s on the outside.  After an hour or so Ryan sat up because he heard a burro, I didn’t hear it at first, but then I heard the hooves clip-clopping on the street headed in our direction.  Suddenly, the burro was walking across our campsite right towards our tent.  Ryan quietly shined his flashlight at it trying not to spook it, (FYI… illuminating a five hundred pound animal walking towards you while you are laying on the ground makes it look huge and terrifying).  I shouted, “Ryan it’s coming right at us!”  That seemed to do the trick and the burro finally veered away from our tent and stumbled through the brush behind our tent towards the water.  About an hour later we scared a small critter away from our gear and apparently fed it to the coyotes because as soon as it scampered away from camp a chorus of howling erupted in surround sound.  As if the animals weren’t enough, the full moon was shining directly above our tent like we were under a spotlight all night.  Obviously we didn’t sleep a wink.  Turns out we would start day two not only dehydrated but completely exhausted.

The second day of our trip was definitely the hardest.  The plan was 39 miles and 7,400 feet of climbing, with just a few miles on the pavement.  When we left I announced, “Here it is, the day I haven’t been training for!”  While it was true that I hadn’t ridden my mountain bike enough for this type of trip and had never done so much climbing, I was surprisingly riding very well.  It was my best day on the mountain bike to date.  The ride from Lake Pleasant to Crown King is very scenic; the dirt roads are often traveled by dirt bikes and off road vehicles.  Near the lake the scenery is surprisingly green and lush for the desert.  We passed a few houses, and wondered aloud about how people lived out here.  About ten miles in, it started to get pretty hot.  We took our first short break in some shade and overlooked the lake below us.  I glanced over at Ryan and noticed a look of concern across his face, I asked him if he was tired or worried, and he answered, both.

As we pedaled further away from the lake the greenery disappeared and was replaced with rocks and saguaros.  The sun was now completely overhead so the little shade we did have vanished as the temperatures continued to rise.  We startled two burros and they ran along the road beside us for a few feet and then climbed up the hillside into the cacti.  I was really glad we got to experience that, the West is still pretty wild.  We were now taking more frequent breaks, whenever we could spot a tiny sliver of shade.  We also started walking our bikes up the steep hills to save energy.  It is extremely difficult to push a 65 pound bike up a rocky dirt road, we always questioned if riding would be easier.  By now Ryan doubted if we would make it to Crown King.  It was incredibly hot and he wasn’t drinking enough water because he knew he had to conserve it for the rest of the trip.  We were carrying over ten liters of water (22 pounds), but our mouths were so dry from dehydration that we couldn’t stop drinking.  After passing a few more houses and a cow with horns, we finally made it to the Crown King Trail turn off.  We parked our bikes by the CK rock and took a few pictures.  We were about 15 miles outside of Crown King at this point and were about to start our biggest climb of the day.  We debated turning back, but I convinced Ryan we should push on.  I reasoned that we had plenty of daylight left and it was the same distance to water either way, plus it would be cooler if we kept moving forward.

Literally ten minutes later I had to get off my bike and push it because the road was so steep and washed out.  I tried pushing my bike forward and laid my body across the top tube resting my helmet on it.  I cried out, “THERE IS NO SHADE ANYWHERE!”  Seeing this Ryan finally told me I didn’t have a choice, we needed to go back to Lake Pleasant, yes it would be hotter, but it was downhill and our route forward was only going to get harder.  Sadly, I knew he was right.  I shed a few tears disappointed that we wouldn’t be accomplishing our goal.  My first DNF (did not finish).  Where were the cheering kids on the school bus when I needed them?!  As we pedaled back towards Lake Pleasant I realized how different self supported rides are than Ironman races.  I told Ryan we would have been able to keep going if we had people handing us cups of ice, spraying us with garden hoses and cheering for us like I had in Coeur D’Alene!

Burros in the shade North of Lake Pleasant. 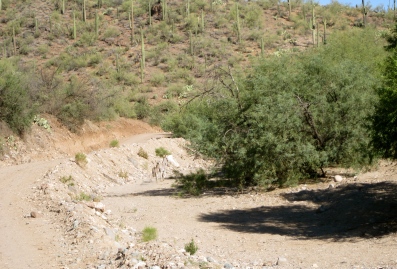 The two burros that ran along the road with us.

The famous Crown King rock, we made it!

Pathetically trying to find any shade.

This is what the best husband ever looks like!

The ride back to the lake was primarily downhill and it was definitely a good thing we turned around.  We both drank all of our water and ran out six hours into the day.  It would have taken us at least eight to ten hours to reach Crown King, which means we would have gone several hours without water.  As we got closer to the lake, I started getting dizzy and felt a dull headache coming on.  Ryan offered to push both bikes for a while so I could regain some strength.  We got back on our bikes for the last few miles.   When I saw the pavement I almost started crying I was so relieved, right at that moment, my amazing mom drove up to pick us up and take us back home!

While the trip didn’t go as planned, it was definitely a fun adventure.  We got to spend a lot of time together, see a new part of Arizona, and we didn’t get in any arguments (I have been known to get a little cranky when things aren’t going well on my bike)!  We learned a lot about how to pack gear on our bikes and tried some new backpacking recipes.  Several people have asked what I would do differently next time, and honestly there isn’t much we could do.  I would definitely carry less food to decrease my overall weight, but carrying any additional water would make things even heavier.  One thing is for sure, I’ll definitely try this again when the weather is much cooler.  Ryan and I love camping, exploring and biking so bikepacking is the perfect activity for us and we can’t wait to try it again!