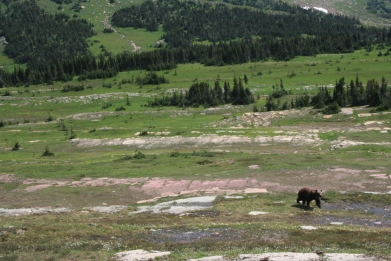 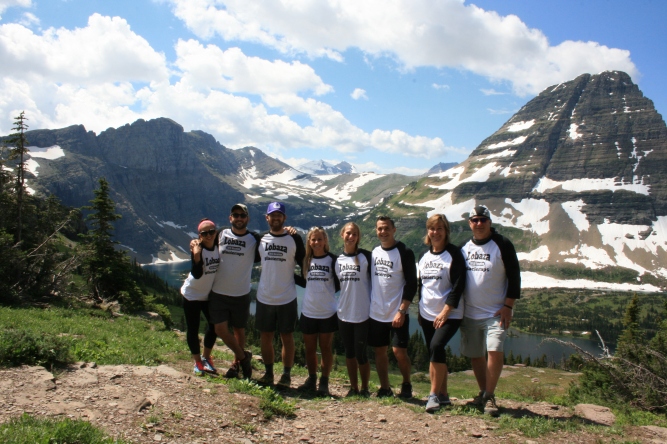 On our second day at GNP the whole family piled into our Tahoe and drove the Going to the Sun Road.  Any book about National Parks highlights the Going to the Sun Road as one of the most scenic drives in North America.  The road is 52 miles long and starts out like many other park roads, winding through trees along the lakes and rivers.  After passing the Avalanche trailhead the road starts to get pretty amazing and quite intense.  You gain a lot of elevation in a short time, which means there is a steep drop off on one side of the car at all times.  The drive is not for the faint of heart or people with vertigo, there are many sharp turns and there is no guardrail to separate your car from the glacier carved valley below.  Luckily, Heaven’s Peak, the Weeping Wall and numerous waterfalls and mountain peaks will make you forget you are carsick, just hope your driver isn’t distracted. The road took over 15 years to build and follows an old Native American hunting trail, it is quite a remarkable engineering feat.

After winding our way half way through the park we reached the highest point on the road, Logan’s Pass.  We stopped at the visitor center and then started our hike to Hidden Lake Overlook, this time armed with bear spray.  The hike again starts on a boardwalk with some stairs and quickly gains elevation, many parts of the trail were still covered in snow.  We reached a plateau on the boardwalk about 20 minutes into the hike and stopped to look back on the visitor center.  Ben and Lisa spotted a bear on the green hillside below and called us back to get some photos.  The bear came out getting closer and closer to the boardwalk trail giving all the visitors a nice show.  This Grizzly bear was much larger than the one we saw the previous day, but also much more responsive to human noise.  As groups of hikers clapped it would change directions until it found a clear path across the meadow onto the otherside of the trail.  We were all happy to see a Grizzly up close, while feeling relatively safe, due to the open alpine meadows surrounding us.

We kept hiking, enjoying the breathtaking views even though we were getting eaten alive by mosquitoes. A few marmots were playing beside the trail, so naturally, being the self proclaimed improv comedian that he is, Ben started shouting “Alan! Alan! Alan!”  Later he showed us all this YouTube video, luckily there are no bears named Alan in GNP.  Eventually we came upon a small grouping of trees with six or seven mountain goats huddled beneath them.  There were two or three babies among the group, that were a little rambunctious and unpredictable.  The young goats jumped on and off the trail with the Mama always following right beside.  Most of the hikers tried to make space for the goats, but some tried to push on through.  This prompted my Mom to become very concerned and yell, “SHE’S PROTECTING HER BABIES!!!”  Maternal instincts run deep, that or the fear of getting impaled by goat horns!

Soon we made it to Hidden Lake Overlook. Wow! This hike has a huge payoff.  We took a lot of family photos and marveled at the views surrounding us.  The peaks in Glacier National Park are unlike any mountains I’ve seen before. The valleys are very distinct, since they were formed by glaciers, making for breathtaking views in all directions.  We found a rock to sit on and eat our lunch and a squirrel decided to join us.  The little guy practically did tricks for us, we resisted the urge to feed or kick him, but Ryan did get a cute picture.

When we got back to Logan Pass we decided to wait for a Shuttle to take us to St. Mary’s Falls trailhead.  After waiting about 45 minutes we were all freezing and growing impatient, so we deicided to drive instead.  On our way down from Logan’s Pass we realized why the Shuttle was taking so long, the road was under construction and only allowed for one way traffic.  Due to the traffic and closed pull outs we were unable to park at St. Mary’s Trailhead so we decided to continue on to Many Glacier.  This is one of the most scenic areas of the park, but it is almost three hours from Whitefish.  By now half of the group was hiked out so Mom, Dad, Ben and Lisa decided to grab drinks and sit on the back patio of Many Glacier Hotel, while Bethany, Jordan, Ryan and I headed out for another short hike.  We really wanted to go to Iceberg Lake, but didn’t have enough time due to the long drive ahead, instead we opted to hike to Redrock Lake and Bullhead Lake.

Clouds rolled in and covered most of the glacier carved peaks as we headed out on the trail.  This trail was in a very wooded area and we passed several groups of hikers along the way.  About three quarters of a mile into the hike we saw some hikers ahead of us stopped curiously peeking around a corner.  Ranger Ryan commented, “they must see something.”  Sure enough, keeping with the theme of the trip, it was a bear on the trail.  This time it was a black bear.  Ryan and Jordan moved to the front of the group with the bear spray and unlocked the safety.  The bear was not interested in turning around, but he just wanted to scratch his back and dig for some grub on the trees near the trail.  Because the trail was narrow and there was now a large group of hikers bunched together I didn’t get a good look at the bear this time, but it sure was noisy thumping around and climbing the trees.  Several of the hikers reacted poorly and started to run.  I quickly observed that people look for calmness during chaos.  When I told people not to run, they stopped, when Ryan told people it was safe to pass the bear, they walked on by.  This is an interesting and slightly scary observation, Ryan is no bear expert, but strangers trusted him when he gave direction.

Since we had Bethany in our group we decided to head back to the Many Glacier Hotel, if this doesn’t make sense, read about how Bethany reacts to bear sightings here!  Once again, we got to experience the true wildness of Glacier on our second day in the park.  We also got to experience some of the rich history the park has to offer by driving the Going to the Sun Road and visiting the Many Glacier Hotel (which turned one hundred this year).  You don’t have to spend much time in Glacier to understand why its known as the Crown of the Continent, I’m already looking forward to going back some day.