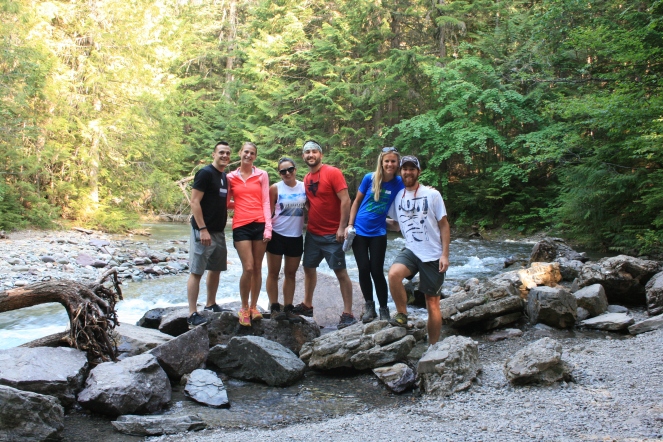 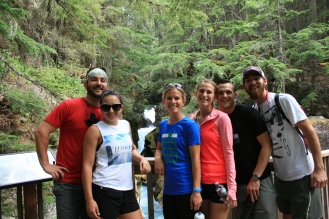 Our first day at GNP was a quick visit after driving from Coeur D’Alene to Whitefish.  We were staying on Big Mountain in Whitefish, which was beautiful, but unfortunately not very conveniently located for exploring the park.  The running joke the whole trip was that it was close in Montana miles, since everything is expansive and wide open.  The drive to the park from our condo was about 45 minutes, and that was just to the west entrance, driving across the park adds another one to two hours depending on traffic and the destination.

Since our first visit was around 4 PM we decided to stay on the west side of the park and try to hike to Avalanche Lake.  We were there with my brother Ben, his girlfriend Lisa, my sister Bethany and her boyfriend Jordan. The hike to Avalanche Lake is a short 4 mile hike, but I felt a little apprehensive since I had just done Ironman Coeur D’Alene the day before. Leading up to the trip our family spent a lot of time talking about bears. My Mom watched a TV show two weeks before our trip about a father and daughter that were attacked by a Grizzly on Grinnell Glacier trail, so we were all researching about what to do if you encounter a bear.  On the car ride over we were talking about climbing trees and as we parked the car Ryan jokingly said, “Ok, everyone got their bear cologne on?”  Haha, not only were we not wearing “bear cologne” we didn’t have bear spray and our only “weapon” was a selfie stick.

We started the hike on Trail of the Cedars, which was a nice trail along a boardwalk in the woods.  At the turn off to Avalanche Lake the trail started up and down some small rolling hills, which restricted much of the view.  Eventually we made our way up to the ledge of an amazing gorge.  The gorge was filled with rushing Turquoise water and the trail followed alongside it, gaining elevation with the creek running beside us about 50 feet below.  We stopped to take in the views and snap a few pictures.  Unfortunately, that was the end of the selfie stick, as it broke after the first picture.

We continued on, chatting as we went and saying hello to families passing in the opposite direction.  This is one of the most popular trails in the park, so we saw many families and even a Dad carrying his sleeping child.  As we walked on further we crested over another hill and Ryan, who we dubbed “Ranger Ryan”, spotted a bear.  He called out, “bear” and we all crowded in to get a look.  Well, almost all of us, my sister’s fight or flight instincts kicked in and she started sprinting down the trail back the way we came, even pushing Lisa out of the way!  We got Bethany to stop running and had her come take a look at the bear.  At this point it was probably about 75 yards away off to the side of the trail.  We watched closely and started shouting “Hey Bear!” while Ryan tried to snap some pictures.  At that point we realized our calling out to the bear wasn’t deterring it, instead of continuing across the trail, it started coming down the trail toward us.  I knew if we could make it back about 100 yards we would reach a wider section of the trail with room to get away from the 50 foot drop off to the creek below.  We started briskly walking back the way we came, Lisa was scanning for climbable trees, while Ben was in the back of the pack staring at the bear and sizing up Jordan to see if he could outrun him.  The rest of us tried to keep Bethany from running.  The girls quickly made it down the small hill and could no longer see the bear.  The guys were between us and the bear and reported he was still coming our way, walking about as fast as we were.  At this point the bear was probably only 30 yards away.  Finally we were all down the hill with the bear out of sight, but possibly still on our heels.  We made it to a group of hikers that had bear spray and warned them of our encounter.  We could no longer see the bear, so it most have gotten off the trail before coming down the hill.  We made our way around of the rest of the Trail of the Cedars loop all talking about how we couldn’t believe what just happened.  The consensus among the group was that it was a mangy looking Grizzly bear,  and that were no climbable trees around!  Reeling from adrenaline we made it back to the car and my brother commented how National Parks are awesome and he loved the adrenaline rush!

After our adventurous hike, we found a nice spot on the shore of Lake Mcdonald to skip rocks and take in the magnificent views.  We were joined by some quiet deer and annoying kids!  A while later we made the drive home and enjoyed a late dinner with my parents.  The sun doesn’t set in Northern Montana until 10 PM so our trip was filled with long days and late nights. While we didn’t make it all the way to Avalanche Lake, we got a quick preview of how wild Glacier National Park is.  This is one of the last intact ecosystems in America, almost all of its original plant and animal species still exist in the park.  When you are in a place so wild and grand it gives you an appreciation for the diversity of creation and instills a deep desire to preserve these special places for future generations.