What is stronger, than the human heart,
which shatters over and over and still lives. – Rupi Kaur

March 4, 2018 will forever be etched in my heart.  It is a day that God has knitted in my heart for a long time.  God has given me a passion for women and cycling.  He has ignited a fire in my veins when it comes to fighting sex slavery and the objectification of women.  Over time he has softened my fiery passion with a gentle heart and prepared me in so many ways for what will be one of the most remarkable days of my life.  This day broke my heart into a million pieces and fulfilled me in so many ways, it left me humbled and broken and ready to take the next step forward in this journey. 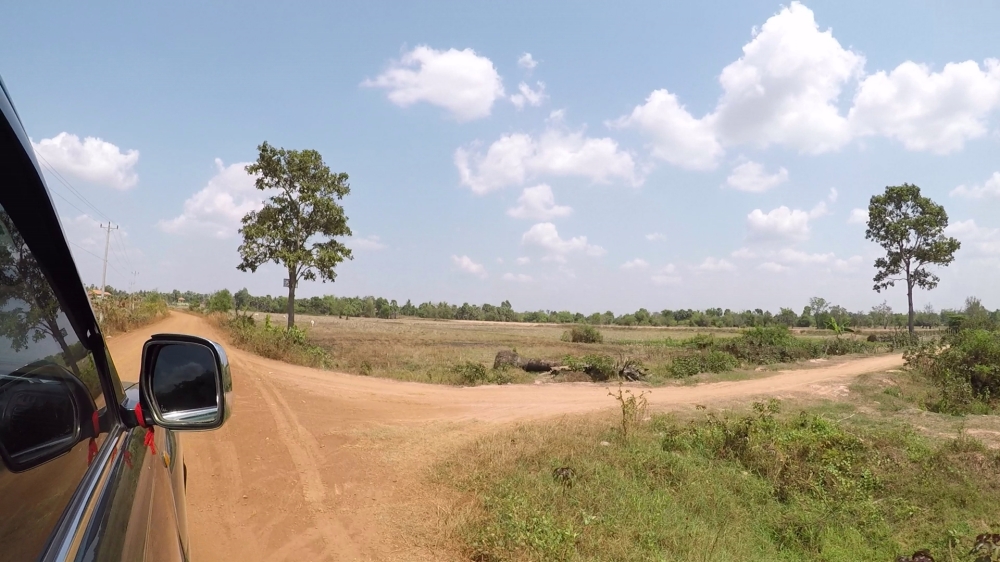 We left the hotel early and drove out of Siem Reap to the countryside. Expansive fields stretched as far as the eye could see, blanketed beneath a clear blue sky.  Soft white clouds and lonely trees sparsely freckled the sky.  After driving for an hour we arrived at our first stop in Puok. We were visiting Sohorn at her beauty salon, where she also lived.  She received a bike from 88bikes in 2016 and we were doing a follow up visit with her.  We pulled up to her salon which was a small roadside shop.  She wasn’t there when we arrived, but came up the driveway on a motorbike a few minutes later with groceries in tow.  As she carried the bags inside a small fish got caught on her dress.  Sohorn is a survivor of human-trafficking and with the help of AFESIP was able to start her own beauty salon.  We decided to get our hair done while we were visiting with her.  A shampoo, cut and blow dry cost two dollars.  And the price was in no way indicative of the level of service or expertise.  She probably spent fifteen minutes shampooing and massaging our scalps.  It was extremely soothing and incredibly relaxing. 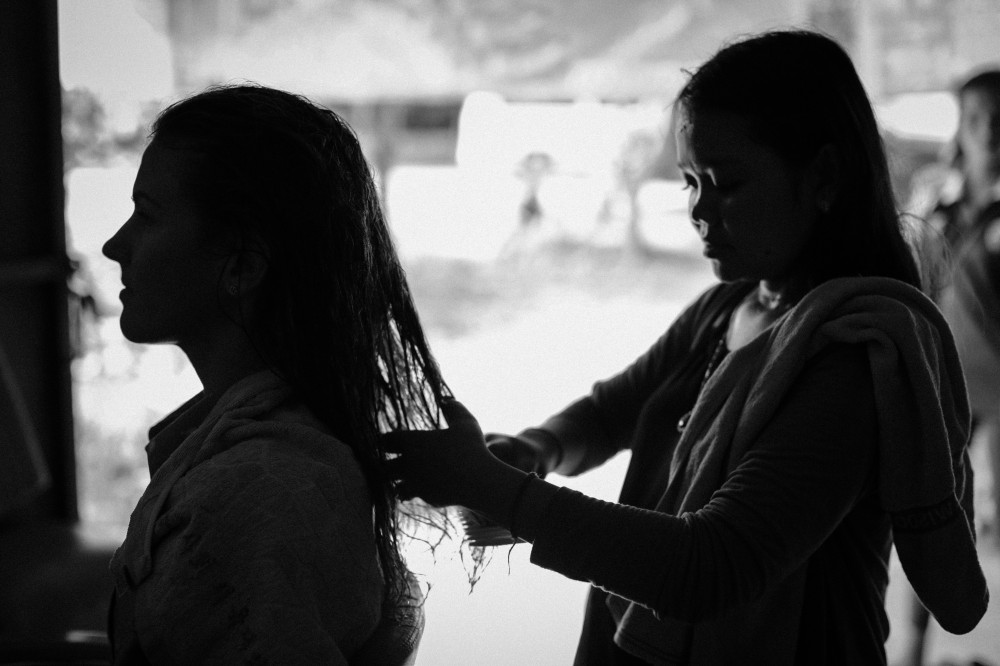 The shampoo bowl was in the back of the salon, maybe twelve feet from the entryway.  To the right of the sink was Sohorn’s bedroom.  Two wedding portraits hung on the wall in ornate frames, a queen size mattress lay on the ground.  There was also a small chest of drawers and a few other storage containers set up around the mattress.  There was no bathroom in Sohorn’s house, she used the shared bathroom on her landlord’s property.  Even though we didn’t speak the same language Sohorn was eager to talk with us.  Sothy helped translate for us, as she showed us her wedding album and explained that her husband worked as a commercial roofer in Siem Reap.  She also proudly told us that she had a student working with her, another young girl that she was training to work in a salon.  When Sohron finished shampooing my hair she walked me over to her station to comb and blow dry my hair.  When she finished towel drying my hair she started laughing and held up the tangled nest my hair had become so I could see it in the mirror.  I had to call Sothy over so I could tell her not to worry, she didn’t need to be gentle combing it out.  As we were getting ready to leave Sohorn told us that she was going to have a baby this spring, she was beaming.  We snapped some photos and said our goodbyes and Sohorn gave me a kiss on the cheek. 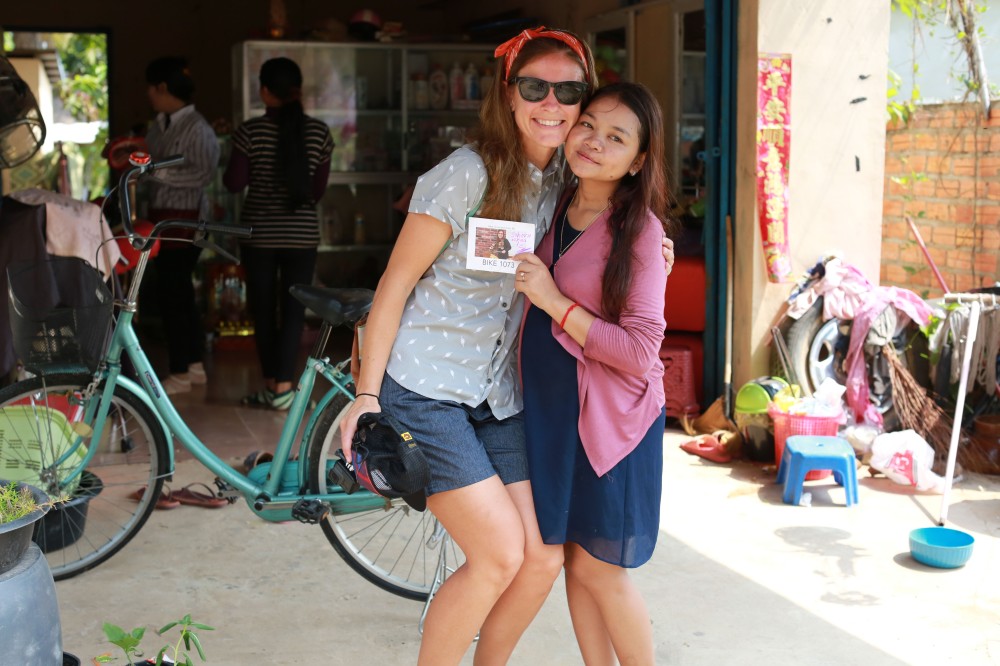 We continued driving even further away from the city.  By now the traditional Khmer music was putting us to sleep, so Sothy put on some electronic dance music, which apparently came from Thailand.  It energized us for a little while, but after we listened to one song with a simple and repetitive beat that lasted over seventeen minutes we’d all had enough EDM.   We turned off of the main road and traveled for several miles down red dirt roads.  Palm tress lined the road, we passed a small Wat (temple) and turned down a few more roads until we eventually arrived a Sora’s home.  When we arrived Sora was working at one of her Singer sewing machines.  She was working on a wedding dress for one of her clients. She was happy to see us and showed us her bike, she shares it with her younger brother so he can ride it to school each day.  Like Sohorn, Saro had started her business with the help of AFESIP, the organization that helped reintegrate her into village after she had been rescued from human trafficking.

Sora’s home and business were in the same small building.  While small, the space was immaculate, which was shocking considering all the dirt and dust from the road and surrounding fields.  The walls of Sora’s home were a calming and vibrant blue, which matched her personality.  We looked at all of her fabric and she showed us the dress she had made at one of 88bikes Seamless Possibilities workshops.  We decided to have Sora sew headbands for us so we could support her and buy a personal souvenir.  While we waited for her to finish sewing her mom walked across the property to the sugar cane fields.  A few minutes later she came back with sugar cane for all of us.  I was blown away by the hospitality. 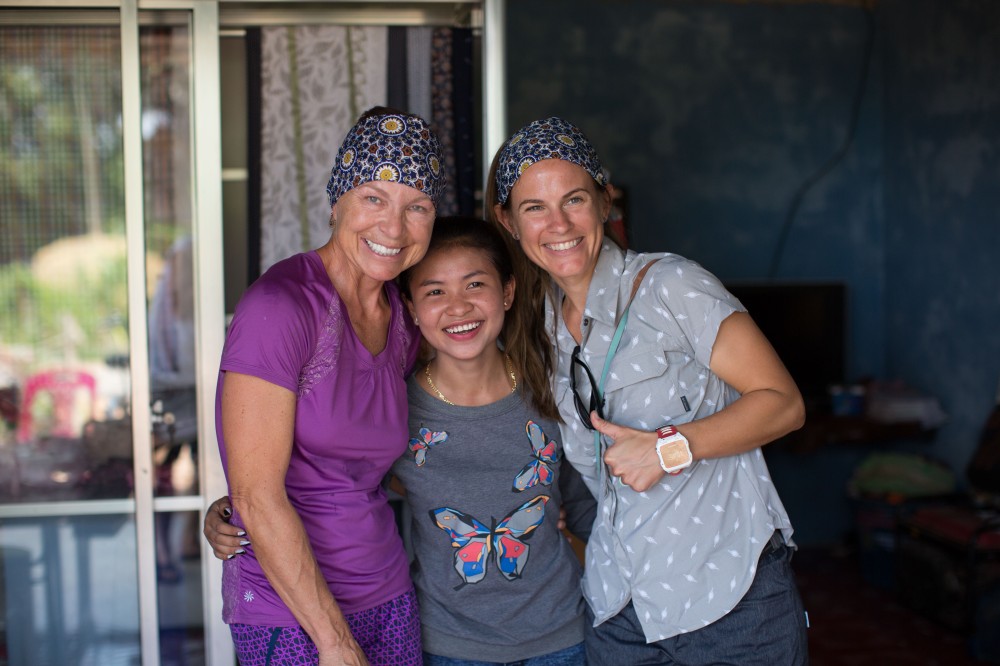 A few houses down from Sora was another survivor that had started a sewing business through AFESIP.  Like the other girls, she had also received a bike from 88bikes in the past.  We stopped in to say hello, even though her business was closed because she just had a baby.  When we arrived she was nursing her two week old baby.  She sat on her back patio, which was also the kitchen, with her parents and extended family.  They all welcomed us in right away and cleared seats for Ellen and I.  The young girl was twenty-three years old.  Her husband and his brother were away working in Thailand for two months, where they’d be able to earn more money, $225 total for both of them.

As we visited with each girl I noticed how strikingly beautiful they were.  They had no blemishes or imperfections.  It made me cringe to contrast their beauty against the repulsiveness of trafficking.  When I thought about everything each of the girls had to overcome to get to where they are now as small business owners I was struck by their resilience. In the face of such adversity they got past it and were building lives for themselves as beautiful as they were.  I have nothing but the utmost respect and adoration for the three women I got to visit with on March 4, 2018.  I love them for who they are and am so thankful for what they taught me about myself and about life.