A few posts back Danielle shared some of the top gear for your car camping kitchen.  One of those pieces of gear was our faithful Coleman stove.  We’ve had this thing since college and it works great every time.  We love this stove and it’s probably one of the most used pieces of gear in our arsenal.  We have cooked plenty of meals on that thing.  Its high output can boil water quickly or it can be turned down to provide a nice simmer.  It really is a great piece of equipment, but the only problem is that you can’t take it backpacking.  Well I suppose you could if you are the anti-ultralight backpacker, but as the saying goes an ounce in the morning is a pound at night so this would feel like 55 pounds at night (and that doesn’t include the propane canister)!

Enter in the backpacking Primus stove.  This was the next evolution in our stove game.  A couple of years back I was planning a weekend backpacking trip along the Mogollon Rim with friends.  All of my friends had backpacking stoves except for me.   Of course I used the excuse “everyone else has one” to justify the purchase (even though I could have easily borrowed theirs for the short trip).   I’m very happy with the purchase, it is a nice stove and we have used it on many occasions by itself or as a second stove when needed during car camping.  It’s light (3.4 oz w/out fuel), compact, and even came with its own little nylon carrying case. The model I purchased has a built-in piezo igniter and this is my one complaint about the stove.  The piezo is not reliable so I always carry a lighter or some matches as a backup (a good idea to do in general) and it’s a little awkward to use the lever-action for the igniter.  If I were to do it over I would have opted for the model without the igniter to save myself the frustration and a couple extra precious grams and dollars.  Back to the good stuff, like I mentioned earlier this thing is compact.  The pot holder arms fold around and can be stored inside my lightweight mug.  When set up and pot holder arms are deployed it is very stable and can support my little mug or even a larger pot very well.  It boils water very quickly too.  Although be warned the little nylon carrying case does not do well as a pot holder…lesson learned the hard way.

Smaller, better, lighter…the alcohol can stove.  As we prepare for our upcoming bikepacking trip I came across a great article on can stoves from bikepacking.com.  This article provides instructions on how to build five types of can stoves.  Not that we needed a smaller, better, lighter stove, but these can stoves looked like a lot of fun to make.  I followed their recommendation for the “Sideburner” design and got to drinking and then building (may not have been wise seeing that sharp objects are involved).   For the first iteration I followed the instructions from bikepacking.com and the stove came out just OK.  Not because the instructions were lacking, but because I wasn’t patient.  Some of the cuts weren’t that straight and I accidentally dented one can during assembly.  In the end it worked and worked pretty well, but I knew it could be improved.  So version 2.0 was born and it was much better and slightly smaller.  Lessons learned from version 1.0 to 2.0:

This little stove was not only fun to make, it works well too.  It takes a little longer to boil water than my backpacking stove and it’s difficult to adjust the flame intensity, but it’s significantly lighter (0.35 oz w/out fuel).  Another advantage of the can stove is that it uses alcohol as a fuel source which is available at all pharmacies both locally and internationally, fuel for my Primus stove on the other hand is harder to find.  If you are looking for a very lightweight stove for the primary purpose of boiling water then you should consider the can stove.  They are cheap and fun to make, if you aren’t the DIY type there are some companies out there that make similar lightweight alcohol stoves (Vargo or Trangia). 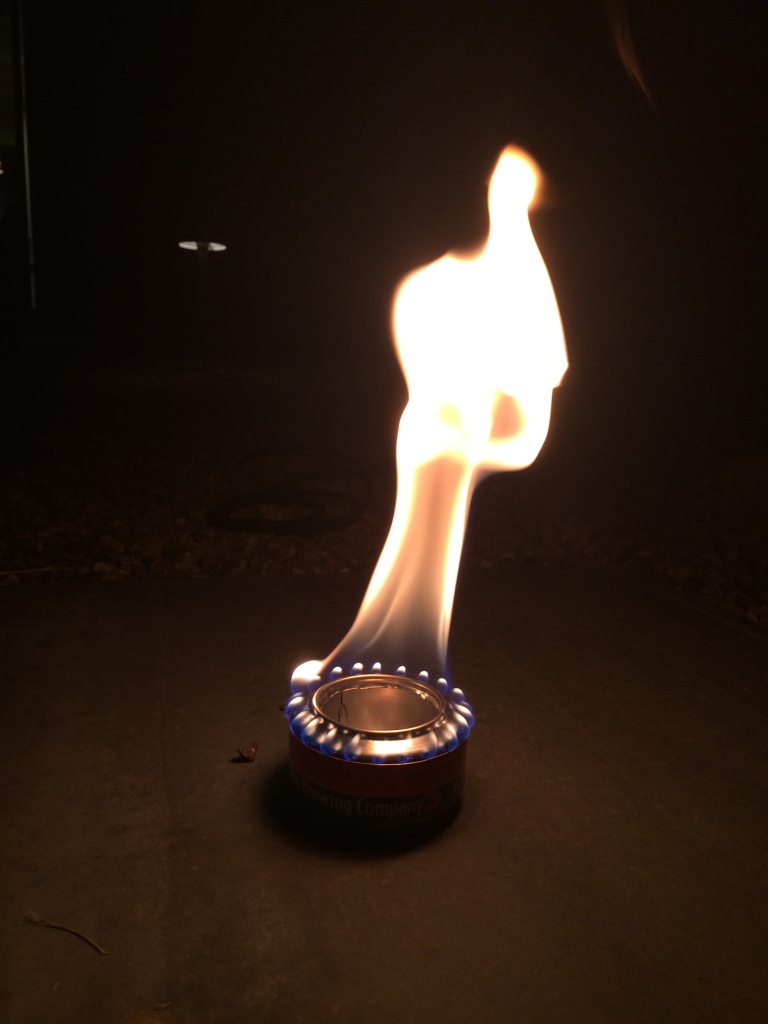 There it is the evolution of our camping stove.  Not sure we can go much smaller or lighter other than not carrying a stove at all.  For our upcoming trip I plan to carry both small stoves.  Sure it’s a bit of a weight and volume hit, but since we haven’t used the alcohol can stove out in the field yet, it’s worth the peace of mind to carry a backup, ideally we won’t need it.