Shortly after visiting Petrified Forest NP and camping in our Element for the first time Ryan and I set out on a week long road trip from Scottsdale to California.  We had learned a few things from our first camping trip in the Element and were prepared with new gear and a better strategy for packing and sleeping.  On this trip we were hoping to see Sequoia, Kings Canyon, Yosemite and potentially Pinncales.  Ryan was participating in the Flag2GC mountain bike race on Saturday so I was going to meet him at the Grand Canyon campsite where the race finished and then we would leave on Sunday morning.

Nothing ever goes as planned.  Saturday I woke up early and went on a bike ride, as I was in the middle of training for Ironman Arizona.  After my ride I was planning to finish prepping and cooking our food for the week, ideally getting on the road by two o’clock.     Instead, I crashed hard and had to call in the cavalry (Mom) to come pick me up.  This was my first bike crash and it was really minor, but being sprawled out across the road with blood gushing out of my arm proved to be quite traumatic.  After my Mom and I did our best to scrub the asphalt out of my arm, I tried to finish cooking.  Finally, I got onto the road around four o’clock, hoping to arrive at the Grand Canyon right as it got dark.

Meanwhile, Ryan was just finishing his race and having a great time with friends.  Back in 2013, Ryan was getting really into Strava, the app we use to record our workouts, but he didn’t have a Garmin, so he had drained his iPhone battery while recording the ride.  Five o’clock rolls around and I’m not at the campsite, no big deal, but then its six o’clock, seven o’clock, eight o’clock, nine o’clock….yep that’s right nine o’clock.  Some of you might know that the drive from Scottsdale to the Grand Canyon is only two and half hours.  So if I had left on time, like Ryan thought I did, I would have arrived by five, but seeing that I left at four I should have arrived no later than seven.  Anyway, its nine o’clock and Ryan is freaking out because his phone is dead and he has no way to get a hold of me.  Most of his friends don’t have cell phone service, so he is frantically trying phone after phone, walking to the top of little hills hoping to get reception.

Back in the Element, I was having my own freak out session.  When I arrived at Tusayan, the gateway town to the Grand Canyon, it was dark.  From this point on the route to the campsite was along Forest Roads.  A little freaked out by the dark, I kept driving and finally made it to my last turn about two miles from the campsite.  I smelled what I thought was campfire and smiled, happy to be arriving after a long day.  Somehow, I failed to see the tiny little sign three feet off the ground that said Controlled Burn; however, I did not fail to see the forest a blaze right in front of me.  My heart was beating outside of my chest; flames appeared to be only a few hundred feet from my car.  I was frantically trying to call Ryan and every friend of his I knew that was at the race.  No one was answering!  What happened, did they get too drunk and set the forest on fire (stupid mountain bikers)?  What do I do?  Too afraid to drive through the burning forest, I turned around and drove back to the McDonald’s parking lot.  I called my parents and was almost crying I was so scared.  I finally thought to call the Fire Service and found out it was a controlled burn, phew, my first sigh of relief.  But I still hadn’t heard from Ryan, surely he was freaking out by now since I hadn’t arrived.

Finally, by the grace of God, we got a hold of each other.  We decided that I would sleep in a hotel parking lot and meet Ryan in the morning.  Ryan was not even aware of the fire, but understood that I had too long of a day to try and drive back at this point.  The next morning when I finally saw Ryan riding down a dirt road with his bulky bag and tent strapped to his back, a huge weight lifted off my shoulders.  I got out of the car and we hugged silently.  This was certainly not how we planned to start our vacation, but we were so happy to see each other.  The morning smelled of burnt wood and smoke filled the air as two elk curiously walked by as we drove out of the forest towards California.

The drive through the Mojave Desert is in one word, boring.  There’s not much to share so, I’ll skip that part.  We arrived in Sequoia National Park late on Sunday afternoon.  On our drive into the park traffic came to a halt, a black bear was walking through the woods right alongside the road and people were stopping their cars to get a picture.   This was my first time seeing a bear in its natural habitat, so although I didn’t get a good look, it is something I will always remember.  Once traffic started moving again we made our way to see the most popular attraction in the park: General Sherman.

General Sherman is the largest tree, by volume, in the world.  The circumference at the ground is over one hundred and two feet, and the tree stands at a height just less than two hundred and seventy five feet tall.  It’s hard to comprehend how big the trees are until you are standing among them.  On the walk to General Sherman Ryan and I took several pictures standing in front of the trees, trying to wrap our arms around them to illustrate their magnitude.  There were a lot of tourists on the path to General Sherman, but it didn’t feel overly crowded.  After taking a bunch of pictures we made our way to our campsite to set up camp for the night.  We camped near Stony Creek Village, which was a quiet location centrally located between Sequoia and Kings Canyon.  A family with young kids was camping next to us and it was comical watching them make a pancake breakfast in the morning, especially when the Dad realized he forgot the syrup!

Here is an excerpt from Ryan’s journal during the trip:

Although we didn’t get to spend much time here I fell in love with the park.  To stand among the giants had me awestruck…These trees are a testament to God’s strength.  They have endured thousands of years and have survived harsh winters, dry summers and wildfires.  We didn’t get to see Moro Rock, but hope to return some day to spend more time here. 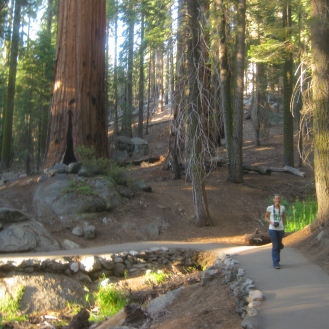 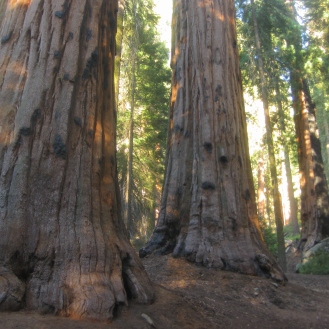